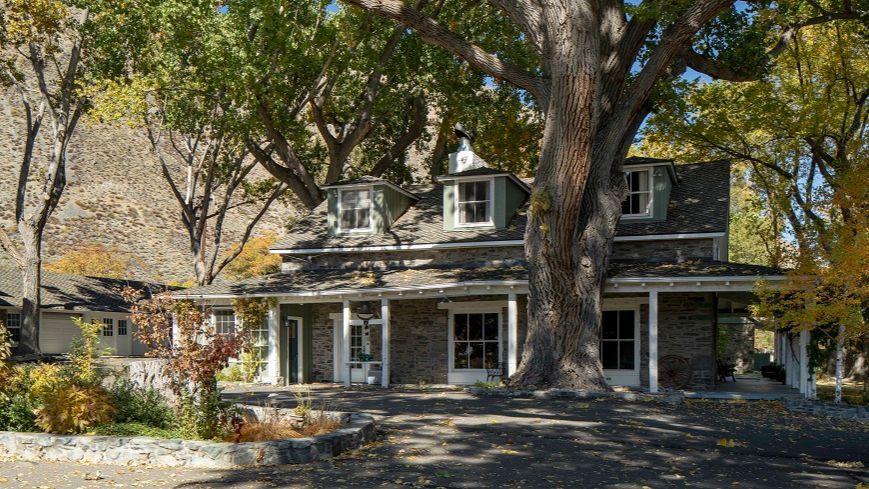 Van Sickle Station Ranch is a working historic ranch on 600 acres upon the eastern foothills of the Sierra Nevada Mountain Range, 12 miles below Lake Tahoe. Located in Genoa, Nevada, est. in 1855, VSSR was an integral way-station and toll pass for immigrants traveling to California seeking golden fortunes. Today, the
property remains a working cattle, horse and hay ranch, with several original 1850s structures, as well as gorgeous restorations, including the 7500’ ranch home, Casa Grande.

Currently, the ‘saloon,’ where the historic confrontation began, is still quite reminiscent, with high ceiling, open hand-hewn beams and original wooden doors. Other features of Casa Grande are: an apple orchard, wrap-around verandas, built from original ranch structure beams; and, the beautiful 360-degree views of the majestic Sierra Mountains, and open green pastures with several meandering waterways. Casa Grande also has a few modernized features, like an in-ground pool, a privacy courtyard, classy décor, and parking/access.

With mild, but distinct year-round seasons, the ranch location is a living postcard! From snowy landscapes, to vibrant falls, the unique high desert location almost always has clear blue skies, regardless of season. The red 5,000sq’ 2-story timber-frame barn is considered the oldest working barn in Nevada. Built in the 1850s, with hand-hewn tongue and groove timbers, remains structurally sound today, constructed entirely with wooden pegs- no nails or bolts. In fact, the VSSR red barn has two one of a kind timber-frame scarf joints that were not known to exist in North America!
In addition to Casa Grande and the red barn, VSSR has hay and horse barns (modern), chicken coop, ponds, and fruit tree orchard, along with a riding arena and mountainside trails, with spectacular Carson Valley views. Casa Grande has a 4-stall garage, and "matching” Genoa Granite and timbers ranch manager home (available for exterior only). Year-round, there are cattle, horses, dogs, cats, chickens, geese, deer, coyote, bear, bobcats, mountain lion, egrets, barn and horned owls (which reside in the red barn), hawks, golden and bald eagles (prominent during calving seasons), to name a few of the local livestock and wildlife. The neighborhood is surrounded by ranch and conservancy land, and views are unobstructed, with limited traffic and noise.
Van Sickle Station Ranch is a unique location, rich in history and lush in preservation.